St. John the Baptist’s Student Council revealed the total amount raised from the school’s annual Lenten Project at an-all school assembly on May 1st. Among the teachers and staff in the audience was Sr. Kathleen Kilp and Sr. Cynthia Young, who were excited to hear the results. This year the school’s Lenten Project, sponsored by the Student Council, will support the Franciscan Sisters and their development of a new Mother House and Retreat Center in Nebraska City.

Student Council members lined up in the center of the gym. One by one, starting with the student to the far left, they each began flipping their cards. Each card revealed a number in the total amount. The crowd of students on the bleachers began cheering, as each number was revealed.  Then chanting and cheering grew louder as the total dollar amount raised by the school became more clear. As the last card was flipped over, confetti began filling the air as the total amount was revealed on the cards. 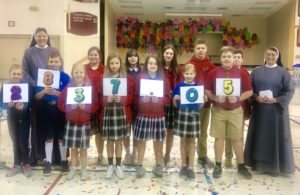 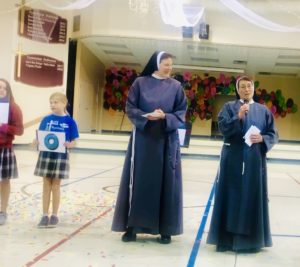 Sr. Kathleen Kilp and Sr. Cynthia Young thanked StJB students and teachers for the generous gift that will support the development of a new Mother House and Retreat Center.

A total of $2,837.05 was raised for the Lenten Project through fun activities the participates in over a five-week timeframe. Activities included “Classroom Penny Wars” and a school “Breakfast Cart.” These activities raised a total of $1,418. Additional funds were collected through a matching gift made by generous parishioners and supporters of the school (who prefer to remain anonymous). The matching gift boosted the total amount  raised to $2,837.05.

The Student Council was pleased with the participation from students and the the project’s results. To close the celebration, Sister Kathleen spoke to students and school staff thanking them for their kindness and generous support of the Franciscan Sisters.

“It’s important to teach our students about serving others and loving others as Christ loves us,” said Sandy Rhoades, student Council sponsor and seventh grade teacher. “The student body and families have been very generous in supporting the projects.”

Throughout the year, the Student Council organizes several service projects and fundraisers for the school. At Thanksgiving, the students and families collected canned food to support the Happy Heart Kitchen in Plattsmouth and the Cass County SENCA. During Advent season, they collected hygiene items and peanut butter and jelly for the Cass County SENCA. Each advent season, the  Student Council also sponsors a Christmas Store and bake sale at the school. Proceeds from both of these efforts benefited Father Marneni’s school and orphanage in India.

Thank you to everyone who graciously supported our Student Council service projects this school year!

Celebrating the Last Day of School!