St. John the Baptist Catholic School is excited to announce that once again students tested higher than the national average in standardized testing for the 2019-20 school year. 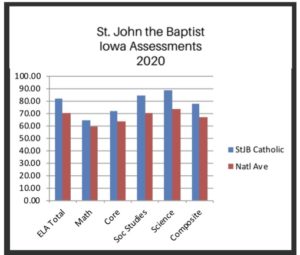 Each spring students in third through eighth grades take a national standardized test called the Iowa Test of Basic Skills [ITBS]. Results from this test show how students perform academically compared to other students across the nation who take the same test.

According to Mrs. Linda Monahan, StJB principal, scores have consistently remained well above the national average for the last five years. The school first began administering ITBS in 2015.

“We are proud of these results,” said Mrs. Monahan. “Our high scores are a true testament to our wonderful teachers and the exceptional academic preparation we ensure our students receive.”

According to Mrs. Monahan, students ranked above the national average in many testing categories including math, core, science, social studies and composition scores. She added that the scores of many students indicate they are performing at one grade level higher than their current grade.

Additionally, of the 36 Catholic schools in the Diocese of Lincoln taking the standardized tests, St. John’s scores ranked in the top three of all schools. Teachers administered the tests to students in early March, prior to school closing due to COVID-19.

StJB to Reopen in Fall

Building a Brighter Future for Our School